Now, this is a pretty large umbrella and I first want to begin with the issue of what marriage is.  While religious pundits would argue that it is an institution from God, I would argue that all religions seem to have it or something like it and some of these relationships predate some religions if archeology and scholarship are to be believed.

Marriage itself had always been a cultural l institution and it can be argued whether it is even a good one.  As a libertarian, I question why it even needs to exist.  There is nothing done in a marriage relationship that cannot be done without the marriage.  In the end, it is about legal obligation and people want to put a romantic spin on it using either religion or calling it an expression of love.  As if somehow by getting married you create some more love than already existed. I think there is a lot of nice touchy-feely to the idea of marriage that keeps wedding planners and officiants making money.

In any case, if we are going to have it I don’t know why the government is involved in the first place.  Yes, it makes it legal but that could also be accomplished by two people going to a lawyer and hashing out a relationship contract. Does the marriage license simply do this in a faster convenient way? If so, I doubt the legalities would be considered equality from a sex point of view, particular in dower states where a woman basically gets half the guys stuff simply by saying ‘I do’ and not such condition exists the other way. The point is those that get married under a license, at least in the United States have conditions of that marriage that they would probably not like if they knew them. 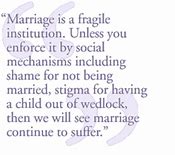 Mostly though marriage survives because of shame and stigma when you are not in certain situations.  The two biggest ones being that not being married is somehow odd and if a woman has a child out of wedlock.  Practically, neither of these stigmas make any sense. As people recognize the bullshit of these stigmas, marriage is indeed taking a hit. I can speak from personal experience that no legal contract, rings or vows will keep you faithful and true nor does an increased level of love result from getting married.

But until marriage is seen for what it is we are going to have it and the state is going to get involved so how should they act when people who normally don’t get married want to do so.  The secular answer is ‘equal protection’ not a restriction of rights.  Justice is supposed to be blind, so she should not be able to judge through the lens of religious bias or social convention.  She should not see that it is a couple of men or a couple of women or two men and one woman or one man and two women or any other relationship that people want to enter into.  The issue is the protection of rights, not to control what marriage is defined as.  That should be left to the people in that relationship; not the state, or even the church.

Of course, if it were up to me, I would abolish marriage licenses and leave the definition of it to the people involved and if they want it to be a legal relationship – go see an attorney and draw up the contract. If you want a religious ceremony go see the officiant but the state in no way should be involved in the first place. In my mind, this is the only way to achieve equality.  As long as the government is involved people can gain control and determine the definition of what marriage is.  This is what causes inequality.

People will always try to control the government so they can control the agenda of marriage.  The best way to avoid this is to give the government no power at all other than to enforce contracts, which it already has through the courts, and provide protection for the people who enter those relationships of their own free will in their own way.