I suppose my belief system is a little complicated. However, at its root or its central tenet is being a deist. However my deism, is not of the same flavor as most people would think of it; nor is it classical deism. Some of the things classical deism upholds, I have modified a little.

As far as faith in the divine goes, I have faith that something exists at the present.  I have an active faith in the existence of something divine. I must state for the record, that I can no longer dismiss the notion that the atheist might be right but at the same time I simply do not think humanity has achieved a level of knowledge that can say – “There is No God” with 100% confidence. I believe there is something out there that we cannot comprehend and that no religion can truly explain.

I maintain that people have their right to any religion they like including the right to not have one at all.  I draw the line however with any religion whose followers want to impose their views, ethics and moral code on others.   If you use your religion to justify harming others or force them to take certain actions because of it; I would say that is wrong as well. Religion is very much like a penis, as one actress in a movie remarked, and should have the same societal limitations. 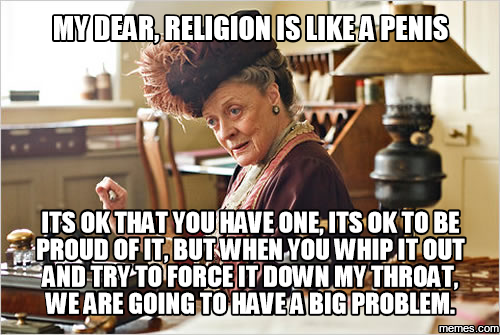 As a long time theologian ( yes, I have degrees in Biblical Studies and Theology), I used to rely on special revelation; namely the Holy Bible of Protestant Christianity, for my foundation for my work in theology.  Having come to recognize fully that the Bible is a fully human book and that the divine has little to do with, I have to look at how to understand the divine differently.

There is no such thing as special revelation in the sense any so-called holy book is a direct revelation of God. You might find the divine revealed in the human thoughts that are presented in such books; as the authors discuss and tell you what they think about the divine, but those thoughts are human not divine.  To do theology as a deist, I am left with my own reason as I observe the world around me.  I am left with my human facilities alone as I observe and think about the divine.  Part of that is perhaps looking at religions to find certain foundational beliefs common to all that can be helpful in this process, but no one stands the divine better than another.  They all may have some truth, but none of them have THE TRUTH.

Deism allows me to engage one other thing and that is to explore the possibility that there is more to humanity than the biochemistry we are left with, if we remove the divine from the equation.   That there is a possibility that man is more than body, mind and emotions but has a spiritual side and an immortal soul. I probably engage this with my more pagan side of my belief system, but it is deism that opens the door to it.

I have fully embraced the notion of pursuing the real divine that actually exists without special revelation.  Natural revelation makes things far more interesting and to be honest, more difficult.  But there is a greater honesty to deism as compared to religious pursuits of the divine that I used to embrace.  Only time will tell where this will lead me.