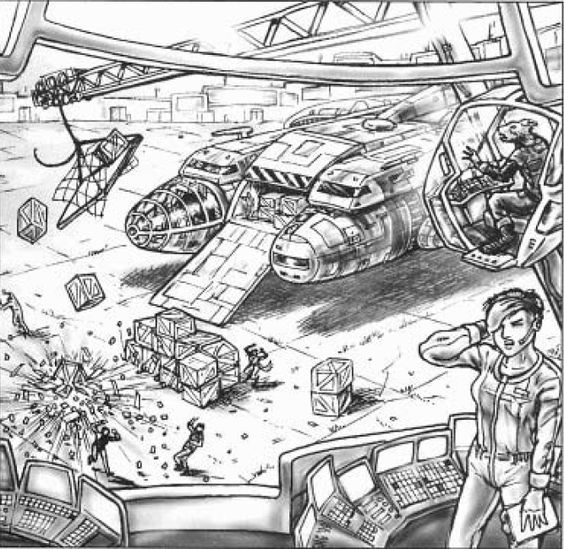 Jeremiah walked down the open front ramp of The Regina Strider.  It had been a long year of exploring the edge of the Imperium for new trade routes. The last assignment with the rich patron had been enough for Captian Junos to decided to take a risk and try to trade across the border and look for new avenues to trade. Because this was going to require an expert in navigation, she hired Jeremiah this time as her Engineer and did the pilot/navigation duties herself.   It was still a position suitable for a 3rd Officer, so Jeremiah had accepted.

Jeremiah missed the pilot’s station on the bridge, but he was equally good at being a starship engineer.  He also knew that most of this would be routine because the Captain kept a well-maintained ship.  Besides he wanted to spend some time learning the one thing he still had not learned in order to be a captain – the interstellar legalities of owning and running a starship.  He and the ship’s library computer had become very well acquainted over this last year as he studied.  He also paid a lot more attention to the legal issues when they came into a new port or the captain talked to the local authorities.

The one close call they had during this run was when some of the cargo they were hauling was being unloaded and the crane operator (A Vargr) didn’t secure it properly and it collapsed on the ground and broke most of it. The recipient wanted to sue the Captain, but she deftly reminded them that once the cargo is secured by the operator, it is no longer the legal responsibility of the starship captain but falls on the port authority.

At the end of the year. Jeremiah took the basic certification test for the legal matters of interstellar law that would allow him to operate as a captain of a ship and passed.   It was noted on his records and at that moment he sat back and realized that one fo his first major goals of gaining the necessary skills and certifications to be a Starship Captain was achieved. Now it was just a matter of time and opportunity to make that happen.

As he walked through Regina’s starport he was somewhat relieved that this year there was no test waiting for him at the end. Once again his contract was up in a week or so and he would be looking for a position for the fourth and last year of his first term in the Free Traders. But first was the monthly ritual of heading to the local pub and having a pint of the house specialty and then finding some companionship for the evening.

Jeremiah had taken his captain’s advice to heart. That said, he didn’t always have to pay for that companionship.  He was after all young and fit.  The money he had earned in the Free Trader’s had allowed him to buy better clothes, so he looked and smelled nice.  He was a good looking young man now and his experience in other worlds was far more extensive than most. He handled himself now with confidence that most young men his age did not have. More often than not it was some young lady that would approach him at a bar and in the course fo getting to know each other better, he would find himself at her home in bed with her.

This had its dangers as one time it turned out that the young woman (a lovely olive-skinned brunette) was married and her husband unexpectedly came home. Yeah, his old warball skills came in handy on that one as he basically shoulder blocked the guy unconscious and then got dressed and left. After that, he asked a lot more questions and in some cases preferred the lesser drama of hiring a girl for the night.  He always knew where prostitutes stood as far as jealous significant others.

The one advantage he had in such things was that they were usually never in port for more than a week and he would just move on.  He was in some way relieved this year was over as it allowed him to take stock and see where he wanted to go from here. He had all the necessary skills to be a captain but what other things did he want to know or be able to do to be a great captain.

He mused on this as he walked and then he saw one of his favorite pub/brothel combinations, a favorite of the Free Traders called The Naked Gypsy.  There were a few girls there that he enjoyed the company of and they had an excellent beer. He smiled and walked in. Time enough to worry about the details of his career.  Right now he could taste the beer in his mouth and feel the body of the girl known as Cherry Rose against him in his mind. and he sought to make that a reality.

Roll of Assignment: Rolls 3 + 1 for Soc lower than  = 4-Exploratory Trade

With the Legal-1 skill, Jeremiah now has all the skills needed to roll for his promotions every term.