In the rotation, I deal with eastern philosophy directly once, but to be honest there is a lot of Taoism in my philosophical viewpoint.  Particularly the idea of balance or what the Taoist would call yin and yang. The chart below kind fo displays the basic difference. 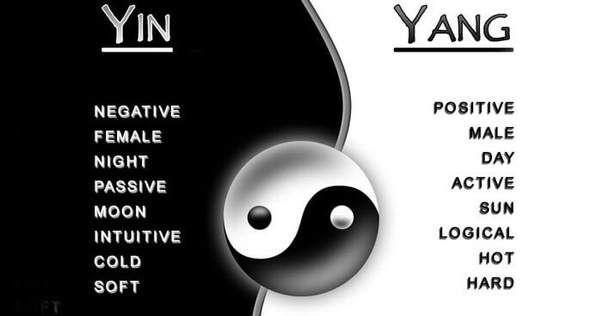 One might say the whole concept of Wolves and Ravens represents Yin and Yang, but it isn’t that simple because in Taoism some things in my philosophy cross the lines to the other side and some of the things might be considered on both sides depending on how they are applied. For me, you might say the Wolf of Need and the Raven of Reason are Yang, but the Wolf of Want and the Raven of Wisdom (which involves a lot of intuition based on experience) are Yin.

If I take anything from Taoism it is the idea of the balance of life. Of keeping things level instead of overdoing one thing at the expense of the other.  The parallels to this idea are in truth in every philosophical system I can think of as well as a large chunk of the nature of each mythology.

Probably this is found in two other notions: 1) Order (or Law) vs. Chaos (or Liberty) and 2) Good (benevolence) vs. Evil (malevolence).   A Taoist would try to strive for a balance between these and be truly neutral about both of them.  I tend to be more Chaotic but neutral about the question of good and evil.  You might say I boil it down to the issue of law vs. liberty and lean heavy on the side of liberty, but the whole good and evil question might be invalid.  I say ‘might be’ because I am still thinking and meditating about it.  The one thing is that I am deliberately unbalanced right now from a Taoist point of view in regards to law vs. liberty. Mostly because I can see how the law is far easier connected to doing harm in the name of good intentions. Whereas to me liberty brings about a respect for the humanity of the other persons in the world which often benefits all.

I would say at that point the Taoist and I reach a fork in the road and I wish them well and then take the fork in the road that says ‘liberty is better than law’.  That said, balance in other aspects of my life is influenced and reflects an understanding of Taoism.  Balance is a constant consideration of mine.

The need for balance is illustrated in what happens when the balance is not maintained.  I can speak from painful experience of the consequences of not maintaining the balance between self-love and loving others as an example.  Too far on self-love and you become a narcissist and too far in the love of others makes you a living martyr that eventually leads to self-destruction.  Neither is desirable and the balance keeps you functioning both in the love of self and others without the extremes of either. The need for balance is pretty clear from a preservation standpoint.

A proper balance is also wanted.  It leads to greater success. I have known many men and women who their life was their work and in the end, they never enjoyed once the fruit of their labors.  Because they didn’t know how to relax and enjoy the fruit of their labors, their health suffered.  On the flip side, I have known people who gave themselves over to hedonism without working at all.  Their laziness leads to poverty and quite frankly a lack of honor.  The ultimate expression of this is the thief who lives on the labors of others.  The one who learns to balance work and enjoyment will be the one who is truly successful and that is something I definitely want.

Reason comes into these things as you have to think about things fairly regularly to observe if balance is being maintained.  Balance doesn’t come easily or without a lot of thought behind it.

I would say Taoism as a philosophy has a lot of wisdom to it, but I would evaluate things ma little differently as far as what needs to be balanced. That said, the principles are very universal and wise at the same time and I have no trouble listening to them and applying those I think leads to wisdom.

I suppose Of Wolves and Ravens is indeed my own form of Taoism.  Balancing need and want with reason and wisdom.  But there is an imbalance built-in to that – listening to reason and wisdom first. A little asymmetry is good for us actually so that is something else to consider. Next week is western philosophy and I think there is a debate there that is about asymmetry that will be good to look at when considering this.