In my Christian blogging day I made quite a name for myself among nudists, naturists, and people of like nature when it came to the subject of nudity and sex.  My view back then was nudity being sinful in and of itself was false.  I have a few online friends who are my friends precisely because of this view and they maintain a Christian nudist lifestyle.  My most famous work from that blog is probably The Bible and Nakedness which you can still view by clicking on the link above.

In addition, I had some controversial views on marriage and sexuality.  Most notably that the bible never condemns polygamy of either form.  That adultery and homosexuality are the same levels of ‘sin’. I proposed that line marriage as proposed by Robert Heinlein is still well within the realms of Christianity, etc.  Mostly I simply separated that which is cultural from that which was the bible and discovered that most of what Christians believe about nudity and sexuality was based more on culture than the Bible.

So what has changed now that I follow a more deistic, humanistic and paganistic path? Honestly, once you take out sin and the appeal to authority; and as I reflect back to the holiday discussion last week, I have the following observations:

Of course, the real question looking at it from a pagan point of view is how nudity and sexuality express themselves on the spiritual front.  This reflects more of my pagan opinion than my deism or humanism but they both chime in on this discussion.

I have faith that there is male and female and we can observe that both of these are real, different and beautiful in their naked expressions.  For me, the faith question here is that I think the human body has inspired my spirituality far more than made me feel guilty or ‘sinful’.  What made me feel sinful about the whole thing was the fact that people told me I should be and if I didn’t there was something wrong with me.  In cultures where nudity is common and prevalent, you never hear of this guilt about nakedness to being male or female. Faith tells me that being male, female or naked is nothing to be ashamed of at all. The real problem is not our maleness, femaleness or nakedness, it’s people who want to use those things to promote an agenda.

In the area of defining gender roles and demonizing nudity, religion takes center stage.  The Abrahamic religions being the most notorious for the definition of traditional male and female roles according to an ethic that is thousands of years old based on a patriarchal, male superiority mindset. The question I have always wrestled with is why women put up with this but I think ultimately it is the appeal to authority and not wanting to displease ‘god’ that drives it, but then again I have watched as those roles get redefined all the time to reflect reality.  If the various scriptures that are the claims for God’s authority are discredited as simply concoctions of men, then women should be free to follow their own personal sovereignty.

Religion and nudity go way back and some religions are pagan enough in scope that they don’t have a problem with it. Those that do often use their holy books to justify it.  The one problem I developed was that on the one hand, I knew what the religious folks said about nudity being wrong, but my own biblical studies concluded the opposite.  When that happens you start to realize that most of the concerns about the human naked form are based on personal preference and culture, not honest biblical studies.  Religion simply seeks to control people by taking those personal preferences and forcing them on others.

My theology these days is based in large part on what is the reality of the world that is.  I don’t engage in fanciful notions about the divine.  I believe in the divine more than I don’t because of notions like love and beauty being something more than biology and physics. That is based on observation from my point of view so take them for that.  When it comes to sexuality I find there is a great design in having two sexes and their need to cooperate as fellow human beings.  Treating each other as justly as possible while respecting differences starts in accepting ourselves as men and women and accepting our differences because of sex.  Glorying in those differences not condemning each other because of them.

Because I don’t believe in sin anymore and dismiss it as a human made up concept, I simply do not see anything inherently wrong with the nude human form. I kind of laugh at our responses to this as we seem to have a greater amount of problems with sex and nudity than violence where people are actually raped and murdered. It’s a sad thing really that something as beautiful and wonderful as sex and the human body has been demonized so that both are considered evil and sinful based on opinions designed to control others. I don’t have that anymore and my attitude toward both is pretty much based on George R R Martin’s below. To me, sex and the beauty of nude human form have given me as much joy as a good painting, book or any other art form and it is a crying shame that most religion and theology rob us of that. 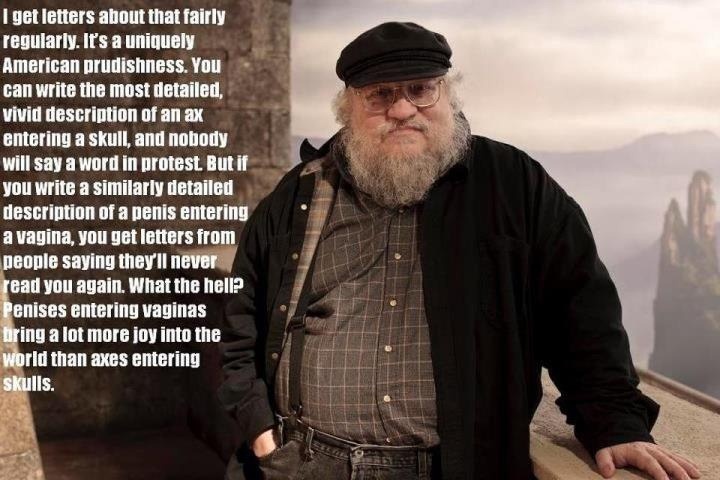 I draw a lot of spirituality these days from this freedom.  I posted this picture on the pagan pulpit this last Sun’s Day:

For me, it reflects a lot of my changed attitude toward these subjects.  I think the look on the man’s face says it all. The topless woman hasn’t caused him to be a lustful pervert, but she has brightened his day a little by being topless. She isn’t a slut for doing so either, Just a woman taking a walk who is comfortable in her skin. Males and females being themselves and doing what they do without coercing each other to do something they don’t want to do.  No sexual pressure, but there is a sexual expression that is being enjoyed by the man as he sees it and the woman as she does it.

Personally, I find that my liberation from ‘sin’ has been wonderful in both these areas.  I can appreciate good art and writings were the questions fo sexuality and nudity are seriously discussed and beautifully presented.  No appeal to authority jumps in to ruin it.  I now very freely accept that I am a man and I’m heterosexual and enjoy both of those parts of who I am.  So I enjoy the female form and there is nothing wrong with it. While there are certain biological factors in being a man, I don’t accept any societal roles about being a man that is forced on me.  I embrace those I wish to and nothing more.

I feel comfortable in my skin as much as in any clothes I wear. The questions of nudity for me are more about how to avoid being arrested for being freer than others accept, not calling down judgment on others for not sharing mine.  My paganism treats my nudity and that of others as a natural thing not abnormal. Naked is our natural form and represents who we are in truth.  Everything else is an add on.

I draw a lot of spiritual insight and strength from accepting these things and living in these freedoms.

I doubt society will change with a wave of our hands.  Religion will continue to ruin and pervert sexuality through the forcing of gender roles.  It will continue to demonize the beautiful and seek to cover it over to hide it. Control is the objective of religion through defining roles and social mores.  All of it is bullshit, but it is bullshit we have to live with because of laws that threaten, coerce and engage in fraud to control others.

The best we pagans can do most of the time is to live our lifestyle expressing the truths of real sexuality and nudism when we can.  On the nudism side, some (like myself) find their answer in practicing nudism secretly, while others carve out places in the world to practice it freely without society’s prying eyes. In any case, being the man or woman you want to be is possible without secrecy in the western world at least.  Just be prepared for the backlash of not fitting in with your specific expression of your gender either male or female.