Seeing I talked about him in my post on Odin last week, I figured I would talk about Thor directly this week.  Thor – God of Thunder, God of Storms. Odin is the god of rulers and leaders.  Thor is the god of the warrior and the common man.  Even in Viking times that made him more popular.  This is probably why more stories have survived about him than any other.  People loved Thor, but they feared Odin because he was the judge of the dead, along with the Valkyrie.

Thor is probably the most well known god of the Norse pantheon today becasue of comic books and movies. He is far more likely to go on action packed adventurers in our world and so people see him doing things actively and often violently. Odin is far more subtle and a master strategist.  Thor is neither. A great example of this is when he wakes up to find his wife’s hair missing. He gets up, surmises that Loki had something to do with it and then goes and physically threaten Loki to do something about it.  Odin probably would have found a way to fix the problem himself through magic and then he would have found a way to get Loki back that was far more subtle.

Thor is the god of thunder and storms.  His wife Sif is the goddess of the earth which is a common paring in most myths.  The rain watering the earth and bringing life is a common concept and it often plays itself out in rain/storm gods being paired with earth/nature goddesses. Thor’s exploits are long but the most notable are:  He welds Mjölnir (Lightning), the hammer of the gods. He is noted for his many battles with the Giants and with the world eating snake  Jörmungand, who he will battle at the and of the world Ragnarok. 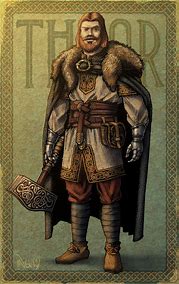 Thor had many other powers, including healing,  He is said to be able to drink more mead and down more food than any other god. In mythology, he is not a blond but a red head.  He also possess the stereotypical hot-headed anger of the red head.  He wears a belt that doubles his already considerable strength.  If you are looking for a god that was a man’s man, then Thor is your god.  He was the kind of man you wanted along side you in battle and the kind of man you wanted to drink and party with as well. Not so oddly, he is also associated with fertility and was often evoke a blessing marriages for fertility.  But part of that reputation was earned outside of marriage with the fact he had many children and a lot of them were not Sif’s. 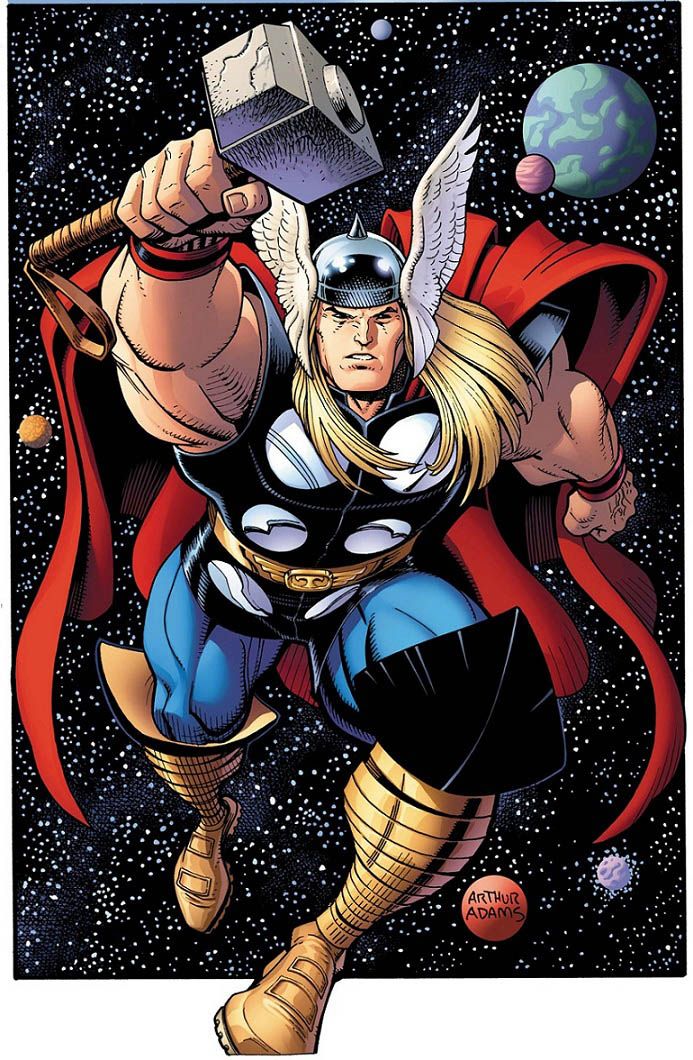 Our concept of Thor in our modern day is largely influenced by Marvel Comics.  Thor is a blond, blue eyed viking type.  The movies and the Comic make him very much the noble hero and try to lessen the fact that he was hot headed, slept around and partied like a boss. He is far more noble in the comics version, than he is in the mythology. 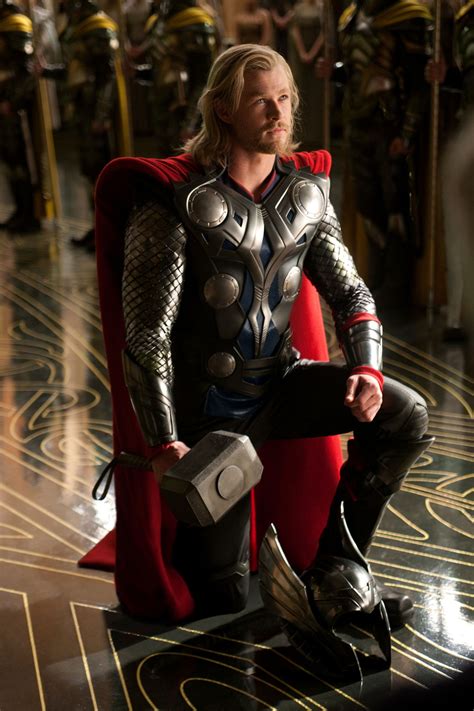 That said I did like the fact that Chris Hemsworth decided to work out to play the character instead of doing the CGI muscles thing.  I think he was a good choice.  It is just our modern world isn’t ready for Thor as he was in mythology, because quite frankly he is fully masculine and makes no apologies for it.  Marvel’s Thor tends to be a little more pretty boy than masculine warrior.

The Thor of mythology is a little rough around the edges, where Marvel’s Thor is polished and presentable. You would be proud to take Marvel’s Thor home to your parents; if you were dating him, and they would think he was such a nice young man. The Thor of mythology, you might have to explain why the fridge is empty, the alcohol is all gone and perhaps why both you and your sister are knocked up with the same due date.

I guess I like characters though that have a little more of a subtle grey side.  Thor in any context doesn’t really have that.  He leaves that sort of thing to Loki. That’s why while I like Thor, I don’t consider him my favorite. Odin still has the honor of being my favorite Norse god. Thor however still inspires a lot of respect for his courage and loyalty to his friends.