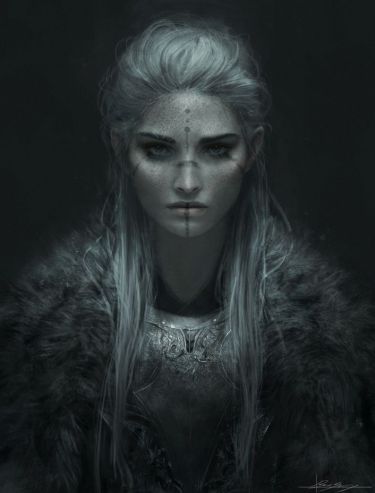 Anya the Bold knew she was dying.  She still clung to her sword while sitting with her back against the tree.  She had lost so much blood through her wound on her left side that she was sure death would come soon.  She had seen this many times before in others but now she knew it was coming to her. A mortal wound that she knew would be her end.

Not that she feared death.  Vahalla awaited and now she had more than enough reason to enter its gates. She had watched her husband die as a warrior.  Vagnar had stood on the bridge with his great axe holding off the Saxons long enough for the rest of them to escape. She knew he would fall but she had not waited around to see it.  She honored his sacrifice while hiding the fact that she herself had been stabbed by a Saxon sword.

She lay dying she thought of his embrace knowing it would soon be renewed in Vahalla. Her thoughts turned to his strong arms around her and the last time they had made love on the morning of the battle when King Godwinson’s army then surprised them.  They had enough time to arm themselves and then battle ensued.  Had not their own king fallen and their ally Earl Tostig, King Gdowinson’s brother fallen as well, things might have been different.  The Saxons had completely surprised them.

She knew her husband had felled many Saxons that day.  How many had fallen would surely be the stuff of legend as the tale was retold.  For now, though she knew he had only proceeded her in death by some hours. She stared at the trees in front of her while her vision darkened…

She awoke but it was not the hall of Vahalla she saw.  The same English trees lay before her and she felt strange. It was now nightfall and she was alive; something she had not expected.  She actually felt renewed and yet also had a feeling like she had downed far too much mead. She could move which when she had fallen asleep she could not do. She had lost too much blood.  How was this possible?

Looking down at her wound, her breath caught in her throat.

It was healed like it had never existed.  Her head swam in disbelief.

“It’s alright, You were dying and I saved you.  You might not, however, believe how.”

She looked to see one of her fellow Norseman standing over her.  He had a strong young face, but his eyes betrayed an age much older.  She had seen him before but did not know his name.

“Because the wife of a brave man needs to be around to hear his tale.”

He held out his hand and helped her to her feet. Then she smashed her fist right into his face, knocking him on his backside.

“You rob me of Vahalla and my husbands embrace.  I should kill you.”

The man sat there, rubbing his chin.  He smiled.

“No.  You will join your husband someday, just not yet.  And killing me might prove far more difficult than you might imagine.”

Anya raised her sword and drove it down; but in a motion, which she did not see, the man stood to his feet and caught her wrist.   The strength of his grip caused her hand to flex and the sword to fall from her fingers. He then put the arm behind her back and his other arm went around her holding her still.  His strength was far superior to any man she had ever met.

“Why would you do this.”

“Because your husband was not the only one who has loved you.”

He let go of her and she spun and looked at him.

“Anya the Bold.  I have watched you for a long time. From the time you were a child.  You have a strong spirit and an intelligent mind. You are brave and a passionate heart.  I have come to love you, but I would not dishonor your marriage.”

“Just call me Erik. Listen, If you want to honor your husband’s sacrifice, live and give him vengeance. What happened today cannot go unpunished.”

Anya looked at Erik grimly and then nodded.  She then held up her sword.  The sword her husband had given her a few years ago.

“I shall avenge my husband, twenty Saxons will fall to this blade, I swear by Odin the All-Father.”

“Good, and I will tell you more about what happened to you. But for now, we must join the others and return home. The Saxons will wait until another day.”

As he turned and she followed a tear formed in her eyes. If only she had known the horrors that awaited her, she might have killed Erik for his ‘gift’.

Its been a bit since I started something new. My hope is this series is intriguing enough and entertaining enough for me.  It is a story I wanted to read but seeing no one has written it yet, I decided to do it.