I know a lot so scholars point out the massive similarities between Frigg and Freya, but as someone who can see why certain things would change.  There are some personality differences in my opinion and I doubt Loki would have challenged the wife of Odin and basically call her a slut without some real proof out of fear the Odin would take it out on him.  Oor is Freya’s listed husband it is said she cries tears over his absence and the similarity to Odin makes people think that maybe Freya and Frigg are the same goddess with different names,

I would point out however that while Freya is a mother, her motherly attributes are subordinated whereas Frigg’s stories seem to have her motherly aspect front and center, particularly for Balder her son.   The fact is that the two goddesses are also said to have different children and their encounters with the other gods and goddess are distinct in the stories. Frigg is Aesir and Freya is Vanir along with her brother Frey.  The only evidence that seems to suggest they are the same goddess is the similarity in their husband’s names and those husband having a tendency to wander.  Sorry in all other aspects they are pretty distinct and different.

Freya is the goddess of love, fertility, beauty, and fine possessions.  The Greek goddess Aphrodite might be a good comparison except Freya has very Norse qualities. Most notably she will suit up for battle when necessary.  She also presides over the realm of Folkvang, one of the realms of the dead. Freya’s duty is to pick half the slain in battle to dwell here while Odin gets the other half.  There is no criteria it seems for who get to go where, just her choice.  This makes her one of the Valkyrie.

Some scholars call Freya, the party girl of the Norse gods. Loki basically accuses her of sleeping with every god and every elf including her own brother.  Her defense is not denial but that it is not considered a taboo for a woman who is married to not take a lover when she wants to, just like the men. There is really no denial. In short Freya is the kind of girl a guy likes when he is single. Her attachment to the forces of fertility, love and beauty draws her into the realm of passionate sex. The image you can see is a girl who can drink, play and fuck all night long.

The one other quality she has is that she is the very definition of a person who practices the magical school of Seidr or the magic of fate. She can see the future through prophecy and can pronounce curses or blessings that stick.  It is she, when the Vanir-Aesir War ended, that brought this magic to the gods and taught it to them including Odin. It is probably a significant thing this happened; as from then on, Odin and all the gods are focused on altering the future fate of their realm.  It drives them and their actions and the whole concept of Ragnarök becomes center stage.

In popular culture, Freya does not appear very much.  Except it is she who were probably conceptualize that the Valkyrie the most.  That sexy, scantily clad warrior goddess is something her image probably brings to us. She appears once in Marvel’s Thor the comic book in 1993.  She is merely a supporting character. She is much more than that in the mythology.  She probably has had many appearances in video games as far as image and character than anything else. Freya speaks to us of prosperity, knowledge and abundance and all the pleasures thereof.  She is connected to cats and fairies. Her sphere is love, lovemaking and pleasure.  But she also is one of the goddesses that can see the fate of men and chooses the slain of sword for her realm and Odin’s Valhalla.  A prophetess who sees the future and says – “It’s not going to end well; everyone dies, so let’s party while we have the time to party.

In my own series The Grey Wayfarer, it is why I chose to separate her from Frigg.  She will give me a goddess character to counter the more motherly Frigg. She is the woman who will be the good ‘naughty girl’ who tempts my protagonist. But in the end will also see his fate and weep as much over him as her lost husband. 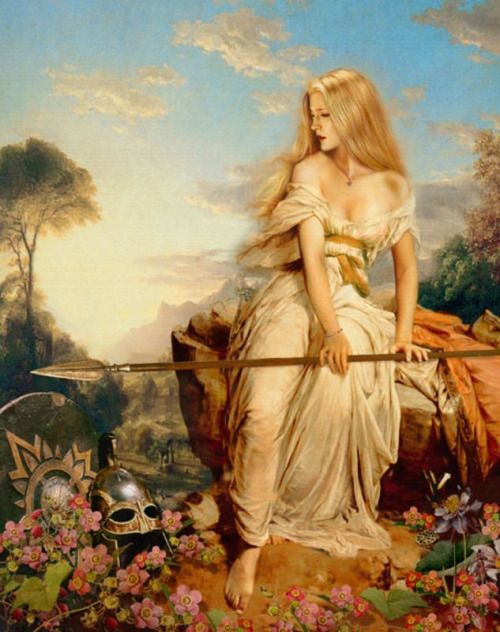 I find Freya to be a great character and one that is distinct and full of potential. There are two very interesting sides to her; as well as a bunch of nuances, that make her a very fleshed out goddess.  Definitely underused in popular culture by her proper name, but her image inspires a lot of characters of fiction and lore.