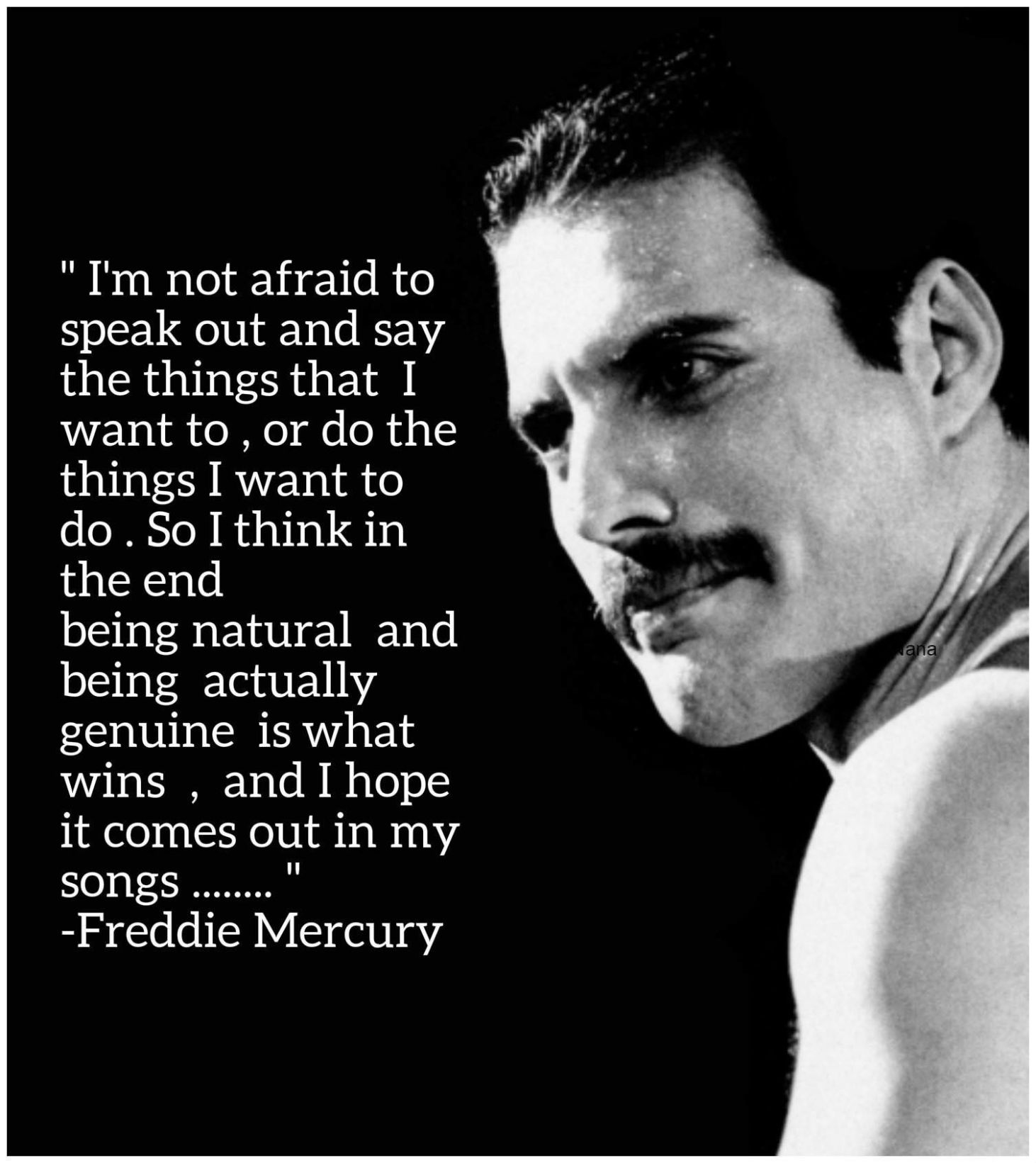 Today’s Pagan pulpit celebrates the life of  man who probably was the best front man in Rock and Roll ever.  Period.  Given that a movie has been recently released about his life, it is only fitting that on this day the Pagan Pulpit pays tribute to the front man of the legendary rock band Queen – Freddie Mercury.

I start with a lesser known song by Queen.  Don’t get me wrong this song is known, but it’s just a straight rock song.  It is Rock n Roll of the era and actually stands out because of it.  Queen was a rock band that defied genre classification because every song was so different.  This one is classic rock and roll and  quite frankly really good rock and roll.  “To those that stand proud, in the shadow of the mushroom cloud.”  Cold War Song as well and one I relate to very well.

Not so much a poem this week as a quote about lyrics and poetry by Freddie.  I think in part nails the problem I had with poetry for years which was trying to find meaning in them instead of discovering it. Sometimes when looking at lyrics and poetry, it just hits you and that’s when you know what it means.

I don’t really have to say anything here about Queen’s probably most recognized song and the most ironic.  It is because their producer wouldn’t do this song, Queen left him and went elsewhere and the rest if history.  Their magnum opus that moved them from being a rock band to a legend.

I am not afraid to speak out and say the things that I want to, or do the things I want to do. So I think in the end being nature and being actually genuine is what wins, and I hope it comes out in my songs.  – Freddie Mercury

As I read this quote I was struck by the phrase ‘actually genuine’.  I wish I could find such people or even better be such a person myself. It seems this world wants to tell you ‘be yourself’ until you actually do it and then the refrain becomes – “not like that.”  People don’t really mean that ‘be yourself’  what they mean is ‘be yourself as long as it doesn’t offend me’ or ‘stays within the normal parameters of what is acceptable’.

Freddie Mercury definitely hits the thing that people don’t like – someone who is actually genuine.  Someone who truly speaks their mind and are themselves.  He lived that and it made him remembered and legendary.

I think we all know what it takes to be successful, we all know what it would be to be truly ourselves.  Most of us chicken out because we perceive the cost becomes to great.  We settle.  People like Freddie Mercury shame us though – he didn’t settle. I think he wrestled with it the same as us, but he was not going to give up what he wanted to be or say just to please others.

I want to be like that.  I am tired of compromising what I say and do at times just so people like me. I want to be actually genuine.

Probably the best live rock concert ever. Less than 25 minutes but no one who saw it live forgets it regardless if they were actually there or watched it on MTV. The Movie Bohemian Rhapsody takes out two songs but this is the actual tape of the whole thing.  Enjoy the ride.

I went to see Bohemian Rhapsody last night with my daughter.  She became a 1980s music fan early on and so she definitely has a bridge between herself and her two parents that her two brothers do not have.  Although I do believe both my sons appreciate Bohemian Rhapsody as a song.  I can say that watching that movie with her is an experience I will never forget. My little girl is all grown up, but for a couple hours, it was just my little girl, me and the band Queen.

Freddie Mercury is one of those legends of music so powerful that even to today people listen to his songs and love them.  Queen was one of those bands that defied genres and still managed to do every single song thy did with skill, style and power.  I was a devoted Christian when Freddie died and all my Bible College friends were saying he was roasting in hell because of AIDS and homosexuality.  Peer pressure says that I had to agree with them to avoid scrutiny, but in one private moment I shed a few tears at the loss of Freddie Mercury.  Some people are bright stars that burn out way too quickly and Freddie Mercury was one of them.  Bohemian Rhapsody remains one of my favorite songs to this day along with tons of others from Queen.

Queen songs have these things called lyrics.  Real deep lyrics.  They also have something that is missing in a lot of others these days – talent that can’t be faked or altered in the studio.  It was one take after another until they got it right.  No auto tune, not electronic alteration.  Just guys with their instruments and voices played and sung well.  I miss that.

The movie ends with the Live Aid Concert that was probably the best concert of Queen’s career and probably the last time people saw the full showman that was Freddie. After that they did many great concerts but that one stands as the moment Queen ruled the world of rock and roll and Freddie was a living legend.  I can’t tell you how the human moment touched me once again and probably deeper.  When I first saw Live Aid as a teenager in high school, I watched it on MTV live and thought what a great moment in time.  Now that I know more fully the human struggle that it took for that moment to take place, I appreciate it even more.   I still miss Freddie.  He is someone I would have definitely liked to meet.

For me though such movies are a double edged sword.  They bring out my emotions and they cause me to do a lot of reflection.  Freddie made his mark because he insisted on what he wanted and fought for it.  He fought a lot with himself but he also in the end was both at peace with who he was and what he was doing. I want that and I don’t think I have ever completely had it. I have compromised a lot because greater things were at stake at times.  But this movie and Freddie Mercury have me thinking about living life without regrets and without compromise.  I want my Live Aid moment like Freddie had.  I don’t know what that would be for me but I want it and I don’t want to compromise to get it.

The problem with the past is it is something we edit and find the good or the bad moments rise to the top and every thing else fades away.  Bohemian Rhapsody the movie brought out several good moments for me but all of them are in the past and I want some more in the future.  It’s been a hard sleepless evening. Whether that is good or bad I guess I will wait and see. But my sadness is coupled with a longing to see Bohemian Rhapsody played out in my own life. A hunger and desire is building in me and I am sure the movie and those memories had a lot to do with it.

I don’t know if they will ever read this, but to the people who made the movie Bohemian Rhapsody – thank you.  If there was ever a life that needed to have a movie about him, its Freddie Mercury.

I also want to thank my daughter for taking her old man to see it.  Thank you, Bug.