Now I am not trying to stir anything up, but I know this post probably will.  I find it interesting that Christians decry Islam for some of its more violent and politically aggressive tactics.  It seems to easy to forget that not too long ago, Christians were doing the same shit.  I would say you can still see Christians doing their level best to use at a minimal level the power of government to force their faith and morality on others.

But I have lived long enough to remember Serbia being a place where Christians killed Muslims in the 1990s. I would also say the continued bombing of Middle Eastern countries is certainly construed as (whether this is the case or not is irrelevant) as Christians killing Muslims.  So perhaps Christians should not be too hard judging Islam considering our current actions and a long bloody history of killing. coercing, defrauding and raping those who were not Christians for hundreds of years. The practical problem for me is that I also know the history of paganism and Christianity and it is equally as bloody.  I am not going to say the pagans were completely innocent, because they weren’t.  But it could be argued no one need have died at all if it wasn’t for Christina missionaries converting rulers and then convincing those rulers to do the above killing and coercion of those that didn’t follow suit in their realms.  If a ruler did not convert, then those around him that had would suddenly cut off trade and go to war with him.  The church pulling the strings to make it all happen like a puppet master. The church may have split on a lot of things but they still do much the same only they are far more subtle

Why is this a practical problem for me?  Because my return to paganism is much about my returning to the faith of my ancestors as it is anything else.  Christianity to those of us of European descent is an imposition, not something that we started as. We started as pagans deriving our faith by reaching put ith the spirituality we had developed to make sense of things. For me having pagan tendencies is returning to my roots and throwing off the chains of an oppressor.

Faith forced is no faith at all.  Faith is internal and based on personal free spiritual choices.  If you force certain choices, that isn’t faith, it is a religious imposition.

I think the conclusion that all the Abrahamic religions are bloody is pretty fair. The fact that they use their faith to justify violence and oppression is well documented. More practically is what I have seen over the years:

Quite frankly, compassion is not the word I would use to describe this – arrogance and pride are better words. I figure most of the wars in the western world might have not taken place if not for Christianity. Now, most of it is because of Christianity and Islam.

As a deist for the most part who enjoys the culture of his real ancestral faith, I see how much I was spending time convincing good people to do some pretty questionable things, including myself.  My theology was one of death for those who did not believe one way or the other.  I no longer see how that can be justified as no matter how hard you dance around it, a god who just kills arbitrarily or simply because people didn’t accept his message is a pretty fucked up god. My guess, people whole like to control others, love such a god though. The amount of fear you can impose on someone with such a god is quite high; and in such fear, people are easier to control. I figure the real divine is far more thorough in his judgment of each individual human than that if he or she or whatever is really concerned about justice.

Oddly enough, despite all this bloody history, I feel the pagan response is genuine tolerance until such time as they seek to impose themselves again. Then resistance is allowed.  As a pagan, I don’t go looking for a fight, but I will gladly fight and finish one to protect my right to freely choose which god myself or others choose to follow if at all. Let the followers of Abrahamic religions once again demonstrate their irrational emotionalism and hatred.  I plan to stand on higher ground than that and defend myself and others.

I live in a house divided.  I am a pagan, most of my family are Christians with a few notable exceptions.  My response to most of it is tolerance, and so far no one is yelling at me or whatever. But I know the past and I know where I stand.  I stand with my true ancestors. 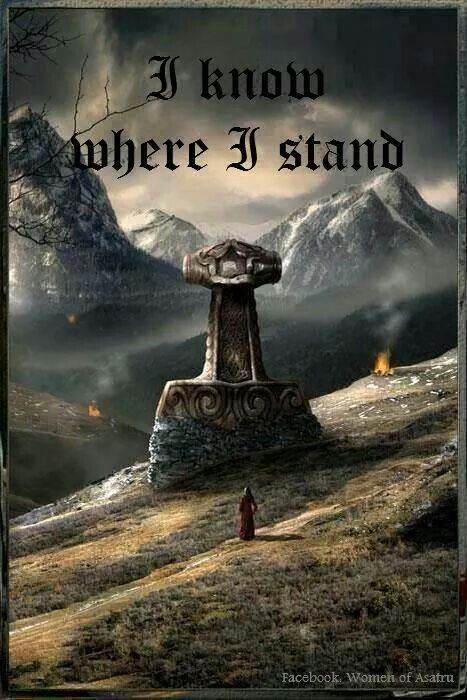